OK, Seriously, How is Whiskey Made?

Explanations of the above stages:

Malting is a process in which grain is specifically treated to access its sugar. Grain is moistened and allowed to partially sprout, or germinate. The process of malting secretes an enzyme called amylase .The amylase converts the grains starches into sugars. The germination process is cut off when the grain is dried by heating.

Mixing the mash is mixing cooked grains with malted barley and warm water.  After several hours, the mixture becomes a turbid, sugar-rich, porridge-like liquid known as mash. The mash is then put in a large tub called a mash tub. It is mixed with hot water and then agitated. Even if not making malt whiskey, some ground malted barley is typically added to help catalyze the conversion of starches into sugars. The mash is also sometimes referred to as wort. As much sugar as possible is extracted from the wort and it then goes on to the fermentation stage.

During the fermentation process, yeast is added to the wort. The yeast eats up the sugars in the wort and converts them into alcohol. The fermentation process takes place in giant vats, often called washbacks. Fermentation takes 48 to 96 hours. Different fermentation times and different yeast strains result in a wide spectrum of flavors in the final whiskey product. The resulting beer-like liquid (called “distiller’s beer” or “wash”) contains about 7% to 10% ABV (alcohol by volume) before it goes on to the still. 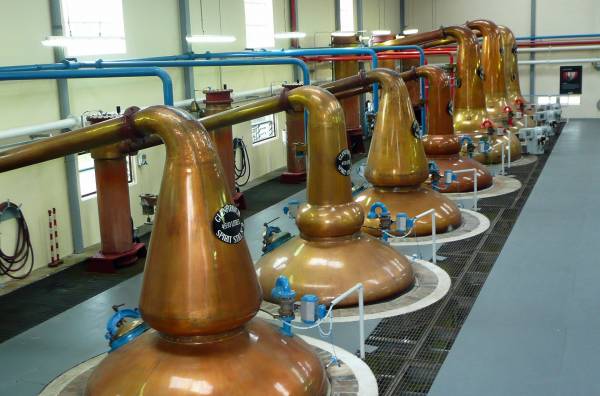 Whiskey Distillery – How is Whiskey Made?
Image by Bernd Hildebrandt from Pixabay

The process of distilling increases the alcoholic content of the liquid and brings out volatile components, both good and bad. Stills are usually made from copper, which helps remove unwanted flavors and aroma compounds from the spirits.

The two most common types of still are pot stills and column stills.

Maturation is aging. Almost all whiskeys are aged in wooden containers, usually oak. Some are new and some are reused from previous distillation or product. One exception to the maturation process is corn whiskey, which may or may not be aged. Bourbon, rye and other American whiskeys must be aged in new charred oak barrels. In other countries, the type of oak and its previous use are generally left up to the distiller. The filled barrels are then stored in warehouses. As the whiskey ages, some of the alcohol evaporates. This is known as “the angels’ share” and it creates a distinct and pleasant smell in the warehouse. Some whiskies, scotch for example, have a required minimum age.

Once matured (ages), whiskey is bottled at a minimum of 40% ABV.  Whiskey may be chill-filtered or filtered in some other way to prevent it from becoming cloudy when cold water or ice is added to it. For most large whiskey brands, a bottling run combines a number of barrels (from a few dozen to hundreds) from the distiller’s warehouse. When only one barrel is bottled at a time, it is labeled as “single cask” or “single barrel”.