Kentucky is as synonymous with fine bourbon as Ireland and Scotland are with whiskey, Germany is with beer, and Japan is with sake. This is the land where bourbon was invented, where it was honed into a fine craft, where it became one of the most beloved, American-made liquors.

If you find yourself constantly craving those smoky flavors, perhaps a trip through the Bourbon Trail is the next vacation you need to take. Any yes– there is a Bourbon Trail! According to the Bourbon Trail’s website, nearly 2.5 million people a year made the pilgrimage

Bardstown is undoubtedly one of the biggest and best areas to visit if you have (or want) bourbon in your veins. So without further ado, here are four of our favorite places in the Bardstown area to get the full Kentucky bourbon experience. 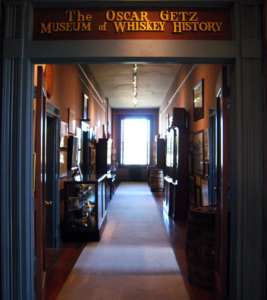 Why not start your trip with a little knowledge? The Oscar Getz Museum of Whiskey History at famous Spaulding Hall has served as a college, seminary, and even a Civil War Hospital. Learna over 200 years of history– not just of liquor, but of Bardstown too. From colonial times through Prohibition, and then on to the founding of the great, local distilleries, there’s plenty of knowledge to drink in.

From moonshine stills to antique liquors, the museum opens at 10 AM (Noon on Sundays) so all this learnin’ won’t get in the way of your day drinkin’ once you visit the distilleries later in the day. They also book special events and larger groups. The gorgeous chapel or even the lush, green lawn could be the perfect place for a bourbon or speakeasy-themed wedding.

And if you really want to limber up for the booze you’re bound to imbibe later on, they even offer yoga classes through Peace of Mind Yoga. 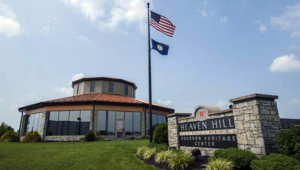 The Bourbon Heritage Center is a part of the Heaven Hill Distilleries, not only will you learn a lot about the history of bourbon and Kentucky, but you’ll get to taste samples of the famous bourbons, Evan Williams and Elijah Craig. Heaven Hill has a close relationship with Jim Beam, perhaps one of the most famous bourbon distillers on the whole Bourbon Trail.

The first barrel of bourbon at Heaven Hill was filled in 1935, but their knowledge of the craft goes back much further. The five Shapira brothers began the distillery not long after the end of Prohibition alongside several other investors. The brothers eventually bought the distillery out from the other investors and their descendents own it to this day.

Wondering about the Beam connection? The original Jim Beam (also known as James Beauregard Beam) had a nephew. Earl Beam just needed his own place to spread his bourbon wings. And that place was Heaven Hill Distilleries. He joined the company in 1946 and his son Parker, and grandson Craig continue plying their trade there to this day.

Of course, you can learn more about that on your trip there. The company currently offers two different tours:

– The Mashbill Tour talks the history of bourbon and Heaven Hill, then offers a taste of three different American whiskeys.

– The Whiskey Connoisseur Experience offers a shorter tour but more booze. Taste up to four premium or limited release bourbons and receive a complimentary tasting glass.

Bonus fact: Heaven Hill also runs the Kentucky Bourbon Festival out of Bardstown, so if you really want to party, make sure you check on the dates of the fest. 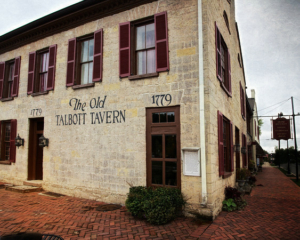 Talbott Tavern on West Stephen Foster Road claims a name as the oldest bourbon bar in the country. You will feel like you are walking right into the pages of history when you enter those ancient doors; by the time you leave, you’ll find yourself confused that you don’t have a horse waiting in a stable outside!

The tavern was built all the way back in 1779, not long after the American Revolution. Since then, it has been a welcome haven for pioneers seeking their way west, outlaws who reportedly still haunt the halls, and even exiled kings.

As for bourbon, apart from the menu being riddled with the drink, the tavern itself has a place in bourbon history. Since the beginning of bourbon, the best and brightest distillers in Bardstown have counted themselves among the tavern’s patrons. The tavern has been through through all of bourbon’s history and it continues to be a gathering place for fans of the true American spirit.

And if you’re really lucky, you may even have a ghostly encounter. That’s right– the Talbott Tavern is reportedly haunted, and not just by anyone. One visitor claims to have seen the ghostly visage of none other than famous outlaw Jesse James, one of the tavern’s more infamous visitors. 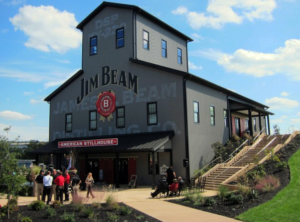 And finally, we reach the crown jewel of Bardstown: the Jim Beam American Stillhouse. Located just north of Bardstown in Clermont, KY, the stillhouse was founded in 1795 by James Beauregard Beam. Beam was one of many young men who went west

At the stillhouse, you’ll have access to four different tours:

Tours start at 9:30 in the AM and go until 3:30 in the afternoon, so make sure you don’t get there too late. And make sure to make reservations at least two days ahead of time and arrive 15 minutes early. Check their website for seasonal events and more information about individual tours.